When a French person talks about "beurre" or if you need "beurre" to make a recipe, it means : beurre doux (unsalted butter).
Butter is made from cow's milk cream. In fact it's just whipped cream that has been whipped a little bit too long !

There are two other different types of "beurre" :

- Beurre salé (salted butter) : nearly the same packaging, same place, same use except it's ... salty. So open your eyes if you don't want to try a salty-tartine for breakfast.
- Beurre demi-sel (slightly salted butter) : exactly the same, just in-between beurre doux and beurre salé.
Anyway, if you make a mistake and buy some beurre salé or beurre demi-sel, just make some crêpes (French pancakes). When they're still hot, spread some butter on and add some sugar. So delicious !

Nowadays, you will also see many different "beurre allégé" (light), they contain less fat, but the taste is different. It's up to you !

How to use it ?
French people used to eat a lot of butter, but not as much anymore. We mainly use butter for breakfast, « tartine » which is what most French people have for breakfast. We don't cook too much with butter, but sometimes it is required for a special dessert recipe.
But be careful, if you want to cook with butter,melt it, but don't burn it, otherwise it becomes brown and takes on a strong taste and it's not very healthy.

Where to find it in a supermarket ?
« rayon frais » (refrigerated aisle), close to the crème fraîche, not too far away from the yogurts and cheese. Wrapped in aluminum foil and sold in « plaquettes » of 250 grammes.

How to store it ?
It keeps for about 2 weeks in the fridge. See the DLUO.
If you want to keep some on hand for longer, just put some in your freezer. When you need some, put it in the fridge so it defrosts slowly. Back to the dairy article 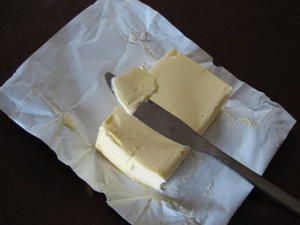